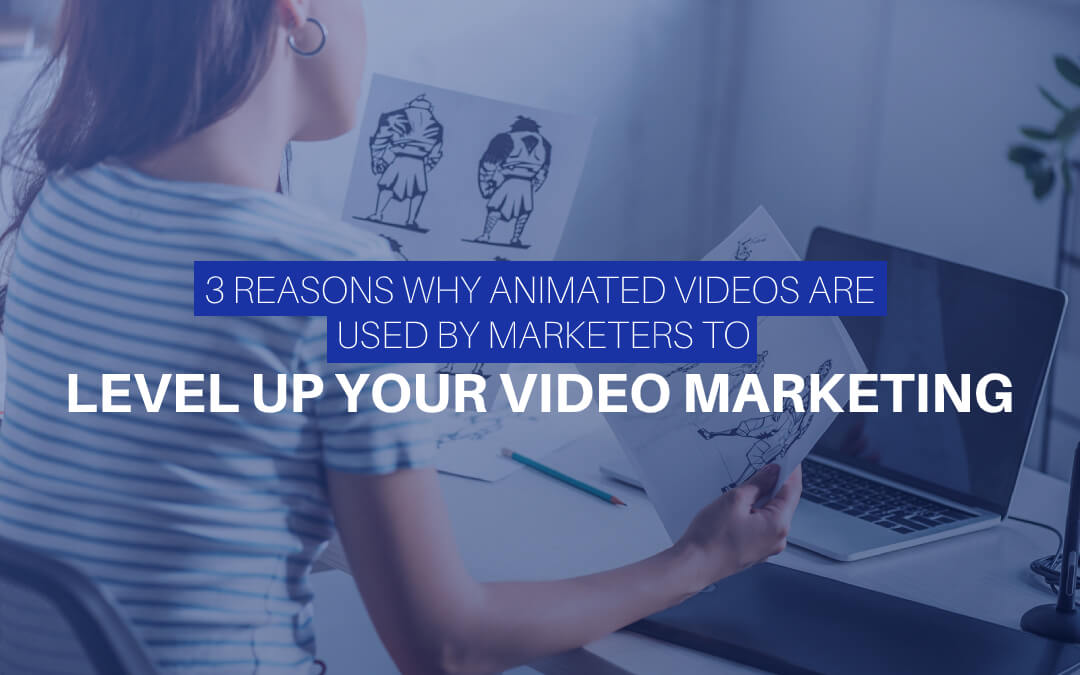 Everyone’s familiar with iconic Pixar and Disney movies, especially their animated movies that bring life to fairytales and fantasies. But did you know that animation has been in existence in as early as the late 18th century? Even in those days, people knew how to use sequential images in quick succession to give the illusion of movement, in puppet shows, flipbooks, and zoetropes.

Today, animation is widely pervasive, and we see it not just in movies, but also advertisements, short films, and explainer videos. What makes the appeal of animation so long-lasting and relevant, even today?

If you are torn between choosing live action video or an animated production for your video marketing needs, let’s help you make a decision by running through some reasons why animations might work better for you:

Animations offer a great deal of flexibility when it comes to creating a brand image. In live action, the cinematography, colour grading, and storyline are placed at the forefront, but in animations, you can also choose a distinct art style and unique character designs to make your brand more memorable.

For example, a hand-drawn 2D animation may evoke nostalgia for the early-days Disney, expressing tradition and familiarity. On the other hand, smooth animations and 3D graphics can feel more immersive, modern, and progressive. So, choose your animation style wisely, as portraying a cohesive and memorable identity is key to making your brand stick in the minds of your audience.

Animating a video might sound like a huge amount of effort (and it is!), but surprisingly, it can be cheaper than doing a full-fledged live video production. Of course, the exact costs will depend on the complexity of your video.

We say that animation productions have the potential to be cheaper, because essentially you just need to pay for the animators to do their work. Whereas for live action videos, you need to take into account costs for venue hire, actors, filming crew, editors, and so on. What’s more, if you are doing a series of videos, many of the creative assets in animations can be reused or repurposed, saving time and cost.

One of the best things about animation is that you can animate absolutely anything! Want a video situated in outer space? No problem. Want a video featuring dragons and unicorns (we actually did it)? Consider it done!

This works amazingly for companies who would love to make their brand mascots come to life. Some brands may also find animations useful for explainer videos, especially if the concepts are abstract, challenging, or impossible to film. For instance, it’s way easier to animate a visualisation of chemical reactions at the molecular level than somehow use a super microscopic camera to film it.

Bonus: It’s easier to do with safe-distancing

A particular relevant point in the COVID-era is this: animation videos can be executed well within the limits of social distancing restrictions. Think about it: With live action videos, your filming crew will already take up a few people, at least, if you include the cameraman, lighting crew, audio crew, and director. Add on your talents and actors, and you’re in for a crowd.

When you hire a 3D or 2D animation studio, you won’t have to worry so much about these social gathering quotas. You can even have a scene with a stadium full of people – animated to perfection – without putting anyone in your team at risk.

We’re not saying that animation is the perfect solution every time – as it really depends on your requirements, but it sure sounds like a good option for many things! If you decide that animated videos are what you’re looking for, don’t be afraid to reach out to animation companies with your goals and ideas.

Here at Gram, we’re a 2D and 3D animation studio in Singapore with vast experience in commercial videos, corporate videos, explainers, and more. Feel free to hit us up for your animation production needs!

I am passionate about using videos, animations, and marketing to tell engaging stories and deliver powerful messages to the right audience. I watch videos from other studios and write marketing content in my free time.
← Previous: 3 Essential Ingredients For Explainer Videos That Work Next: How To Build A Video Marketing Funnel That Boost Sales →