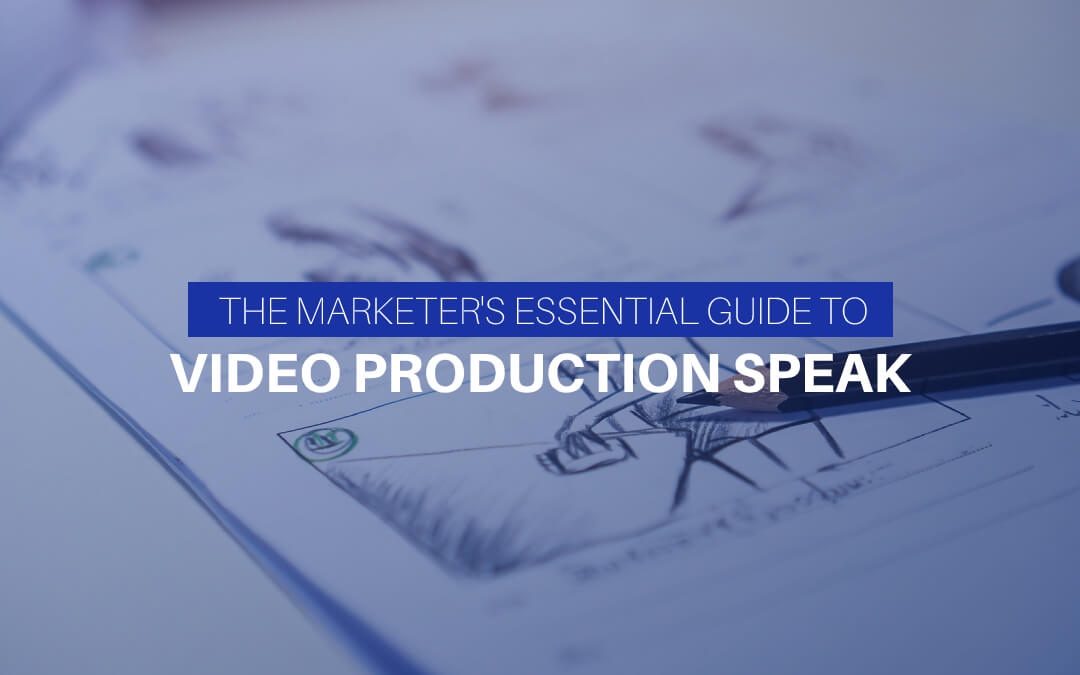 Being a marketer frequently involves liaising with various other creative professionals, including video producers. The problem is, what do marketers know about production? How should a marketer communicate their goals and ideas to a video production agency, without knowing the ins and outs of video production?

That’s why we’ve come up with this guide for you! By no means an exhaustive list, below are some commonly used terms in the video production field which might come in useful the next time you need to discuss a new project with a video production team!

Pre-production means ‘before production’. Most people know this, but don’t fully recognise the work involved at this stage.

Simply put, pre-production includes everything you need before you can go on set to shoot the video. This may include things like:

When used in the sense of ‘filming’, production can also include everything else that happens during a shoot on set, including directing the shots, lighting, sound recording, and so on.

Post-production is generally understood as the editing stage of video creation. Raw footage is arranged in order and trimmed to length, then transitions added to give a smooth flow.

Once the flow of the video is approved, the rest of the magic happens, where motion graphics are added, the color correction is done to make the image pop and look good, audio overlays are added to engage better, and many more, are done in this stage.

Supers, which stands for superimpose, are a commonly used term to represent text or graphic overlays in the video. They are also added in this stage to add additional context or understanding to the video.

The storyboard is a series of images, either in sketches or reference screen shots from the internet, that shows what the video should look like, scene by scene. It is often generated at the ideation stage, and finalised prior to filming.

This is frequently used alongside script, which isn’t always just about the dialogue of your characters. In video production, the script can also include detailed instruction for filming, like scene changes, camera movements, and the like, in the way that they will appear in the completed video.

Finally, shot list is an even more detailed document that outlines everything that needs to be done for each scene of the video. It typically includes technical information like camera angles, camera movement, shot size and location. Usually, this information is for the crew only, and it doesn’t have to be in chronological order of the final scenes in the video.

Colour correcting and grading are terms often used together, or even interchangeably, but there’s a slight difference between the two.

Colour correction is what it says: correction. Due to differences in lighting tones across different footages, colour correction is often needed in post-production to standardise the lighting and colours. Sometimes footages are shot in certain formats such as a flat profile or s-log which makes the video look gray and desaturated. This often means that the video has not been color corrected yet and the color is still ‘raw’.

Colour grading, on the other hand, is more of an artistic choice. It is used to style the colours to give off a certain mood. For example, warmer, sepia tones give off a retro, ‘back in the days’ vibe, while punchy and saturated colours look more youthful and energetic. Depending on the video requirements, grading is often not needed. Real-life colors are usually preferred for corporate videos as it makes it look more serious.

Basically, ‘lower thirds’ is to video producers what we might call ‘captions’ or ‘titles’. They refer to that line of text and graphics, usually at the bottom of the screen (hence ‘lower thirds’), which indicates pertinent information to the viewer. For example, for an interview, the lower thirds will typically display the name, occupation and company of the interviewee.

Smooth communication is key to a pleasant and seamless partnership between marketers and video production agencies. Hopefully, knowing the common industry jargon will help put both parties on the same page, for quicker discussions and fewer miscommunications.

As a commercial video production company ourselves, we are committed to understanding your goals and working closely with you to deliver videos that work. Talk to us and we’ll be happy to make your ideas come alive.

I am passionate about using videos, animations, and marketing to tell engaging stories and deliver powerful messages to the right audience. I watch videos from other studios and write marketing content in my free time.
← Previous: How To Build A Video Marketing Funnel That Boost Sales Next: Video SEO Tips And Tricks For Video Marketing Strategies →